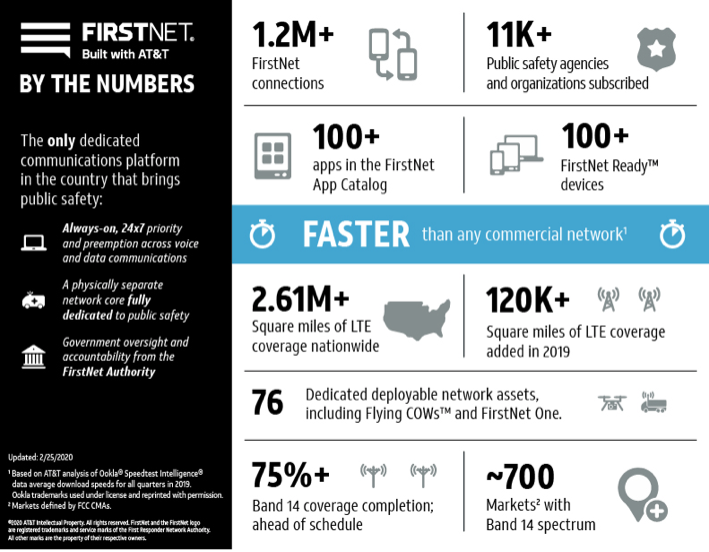 Now covering more than 2.61 million square miles AT&T are aggressively expanding the LTE coverage area for the AT&T network and FirstNet public safety communications platform. This means more first responders and the communities they serve – rural, urban and tribal – are gaining access to the critical communications capabilities they need.

“We’ve been on a mission for some time now to make AT&T’s network not only the nation’s fastest and most reliable, but the nation’s largest,” said Chris Sambar, executive vice president, technology and operations, AT&T. “Despite what Verizon claims with their grossly outdated statistics, the truth is we added significantly more coverage than any other wireless provider last year – making our total coverage difference nearly imperceptible. And we’re on target to add more coverage than them again this year. By expanding our wireless coverage footprint, we’re laying the foundation for 5G, and we’re bringing our nation’s first responders the most expansive dedicated platform with innovative capabilities to strengthen their incident response wherever their mission takes them.”

Last year alone, AT&T added 120,000+ square miles. That’s more than twice the coverage growth than the previous year, or an area equal to the entire state of New Mexico.

The FirstNet network build is boosting overall network capacity and accelerating coverage expansion. It’s also providing public safety with dedicated access when they need it, unique benefits like always-on priority and preemption, and high-quality Band 14 spectrum. These advanced capabilities enabled FirstNet to perform faster than any commercial network in 2019 and bring its subscribers the unthrottled connectivity they need.

“FirstNet isn’t just any network, it is public safety’s communications highway,” said Jason Porter, senior vice president, FirstNet Program at AT&T. “As more and more public safety agencies turn to FirstNet for their communication needs – from massive events to emergency situations like wildfires and hurricanes – we remain steadfast in our commitment to aggressively expand the network and the innovative solutions first responders depend on. And this is only the beginning.”

For example, during pro football’s championship game in Miami, fans broke data records while cheering on their team. But that didn’t hinder first responders using FirstNet. With the dedicated FirstNet network core, public safety’s emergency communications didn’t have to compete with attendees’ voice and data traffic – it came first.

In fact, public safety used almost 4 times as much data per user compared to fans, with traffic reaching its peak as tailgaters began to enter the stadium area. First responders conducted over 30,000 data sessions and roughly 3,000 calls during the Big Game. That’s like streaming more than 100 hours of high-definition video without interference or interruption from fan selfies and social posts.

With more than 11,000 public safety agencies and organizations subscribed to FirstNet, accounting for over 1.2 million connections nationwide, first responders and those critical to their response continue to turn to their network for the purpose-built tools they need for their life-saving missions.

“FirstNet is spurring innovation that will help save lives, and we are thrilled to see the network continue to grow to reach more communities and responders that serve them across the country,” said FirstNet Authority Acting CEO Edward Parkinson. “AT&T’s recognition as the public safety company of the year is a testament to their ongoing dedication to serving America’s first responders. We look forward to another year of FirstNet expansion with AT&T and the public safety community.”