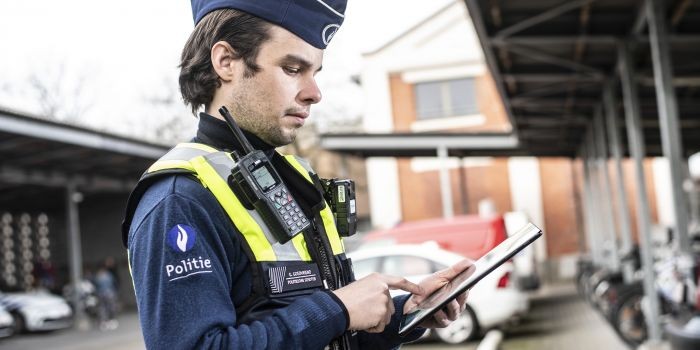 Jef Van Hemelryk - ICT advisor Police Schoten, Belgium elaborates on the use of Blue Light Mobile and the use of Smartphones

Gone are the days when police officers were glued to their desks for downloading data and to write reports. The police of Schoten, (Belgium) have understood this very well. Following the example of Antwerp, the Schoten police has now fully deployed the use of mobile data, with Blue Light Mobile as a reliable partner.

"Schoten made the switch to mobile data back in 2019", says ICT policy advisor Jef Van Hemelryk. "At that time, we were one of the first police zones to join the 'Focus project'. In the meantime, Focus is being rolled out all over Belgium, so it is not that new anymore. But it remains an important improvement."

How did you approach the switch?

At the beginning of 2020, we gave all our operational staff a smartphone with which they can consult the Focus App. Via the Focus App, they are able to browse between various databases. They receive real-time information about incidents, they are able to share images and can immediately make reports on location. As a result, much less time is wasted on administration and the people in the field receive the correct information much faster.

Is 'Focus' mainly used for interventions?

We do indeed use Focus during emergency situations'. In addition, we also are able to use  'Slim Blauw' (Smart blue) on the street, with the emphasis on smart: as we do not always want to be present, we also work preventively. We focus on nuisance and traffic enforcement, among other things. For this we have developed our own smartphone tools that are based on Microsoft Office PowerApps. In this app, our police inspectors receive the locations that they have to visit more often in order to prevent vandalism or drug dealing. Those assignments can still be adjusted during the day.

So the smartphone is your central working tool?

By using the smartphone and the App, the information reaches the people in the field faster and better. In addition, the police inspector also has the possibility to use a tablet computer as well as a laptop at home. Actually it was not planned that homeworking would 'take such a flight', but the Corona virus has decided otherwise.

Is there still room for the trusted ASTRID radios?

Voice communications by using a two way radio remains crucial. The smartphones mainly serves to avoid communication overload. In the past you had to dictate number plates over the radio, but typing the licenceplate number is much easier and you don't have to bother the control room with these details.

You have chosen  Blue Light Mobile as your data provider.

That choice was an easy one. For the price of one provider, you get three, plus extra service and security. Of course you never know what the landscape will look like in five years, but we are very satisfied at the moment.

And the inspectors themselves?

Younger people can't imagine a world without mobile solutions. In the beginning, older staff, sometimes said that things were going the same way anyway, but in the meantime everyone recognises the benefits. If only because they had to use their own smartphonesl to take photos n the past. Now, the equipment is provided by the police zone.

Adecoagro Advances On Its Digital Transformation With Motorola Solutions