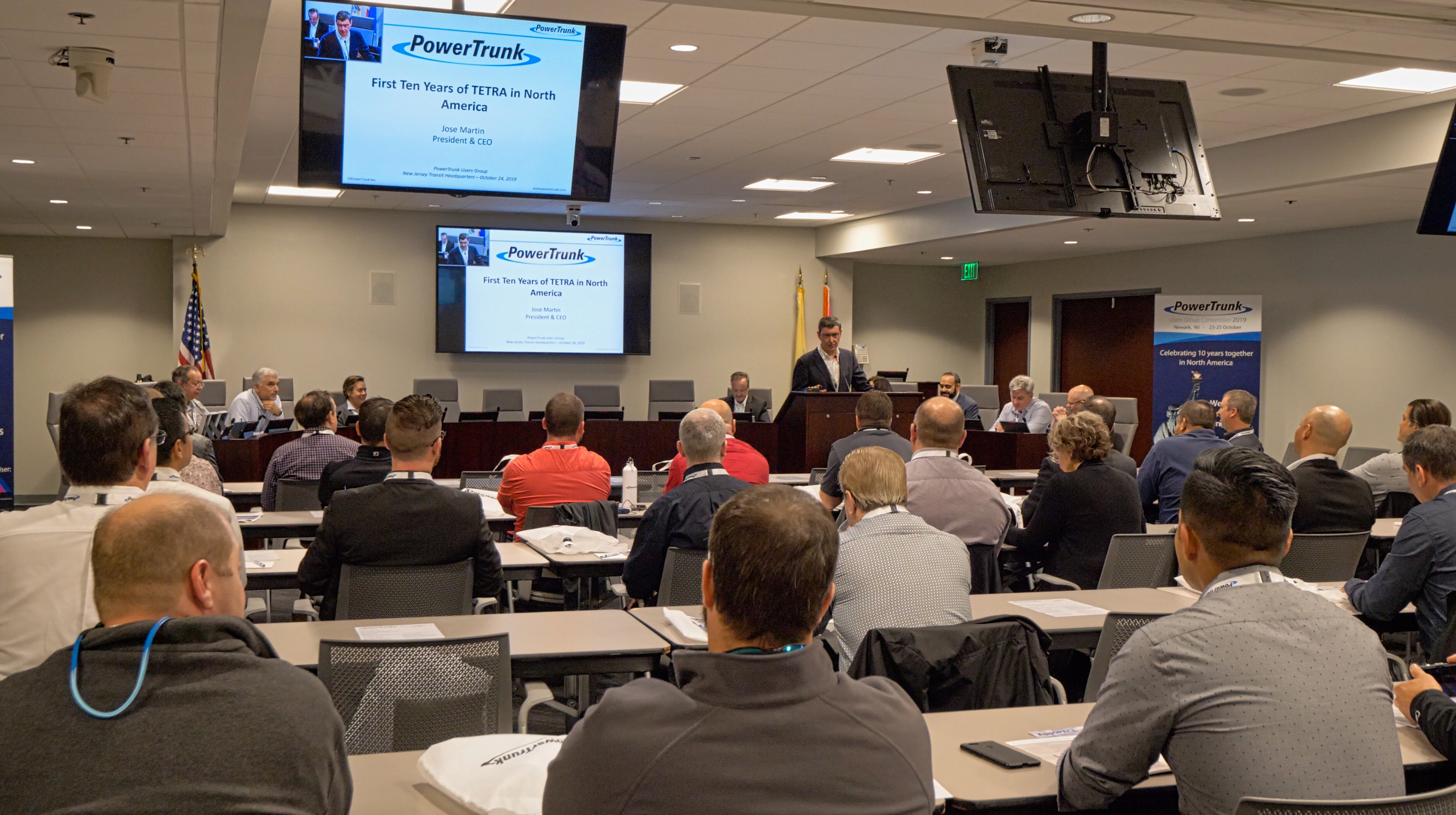 The first PowerTrunk Users Group meeting was held on October 23-25 this year at NJ Transit’s headquarters in Newark, NJ coinciding with the first 10 years of PowerTrunk in North America.

Back in 2009 PowerTrunk obtained FCC and Industry Canada (IC) type acceptance certification with its first TETRA-interoperable D-LMR implementation (sometimes called “reduced power” or “low power” TETRA) intended to overcome the restrictions of the emission masks and occupied bandwidth limits in force at the time; an accomplishment leading to the first-ever TETRA contract in North America in November 2011 (BC Hydro, British Columbia, Canada) and the first in the United States in March 2012 (NJ Transit). Shortly after the BC Hydro award, IC amended its RSS-119 Rules to accept TETRA without modifications in all Land Mobile Radio frequency bands, and the FCC amended its Part 90 Rules to accept TETRA in 450-470 MHz and the non-NPSPAC portion of the 800 MHz band.

In July 2013, PowerTrunk obtained its first FCC type acceptance certificates with TETRA in the narrowband portion of the 700 MHz band through the implementation of P25 capabilities in its multimode TETRA/P25 764-869 MHz subscriber equipment, fully compliant with all applicable FCC and P25 Advisory Panel (Compliance Assessment Program) requirements; an achievement leading to a contract with Parsons Transportation in July 2016 for the MTA/New York City Transit Bus Radio System with TETRA technology, which is currently being rolled out.

Several technical sessions were held to update the attendees on the latest PowerTrunk developments in the field of TETRA/LTE integrated systems, subscriber technology, and applications, the latter raising great interest among the audience in regard to Sepura Appspace, an innovative TETRA app tool. Case studies were also presented in relation to the TETRA systems operated by NJ Transit, Agnico Eagle Mines (Nunavut, Canada), Diverse Power (Georgia), Flint Hills Resources (Minnesota), and Invista (Texas), as well as the TETRA network currently being deployed by the Government of Bermuda for its police force.

Jose Martin, PowerTrunk CEO, welcomed the attendees and delivered a keynote address including an update on the status of the company in the U.S. following the acquisition of its parent companies by Hytera Communications back in June 2017.

“The Commission On Foreign Investment in the United States (CFIUS) conducted a thorough investigation focused on potential national security risks after the acquisition”, stated Martin. “The CFIUS investigation resulted in clearing PowerTrunk to continue selling its products designed and manufactured at European locations to U.S. customers without restrictions, including federal agencies, through a Letter Of Assurance entered into with the Department of Homeland Security (DHS) in July 2018”, confirmed Martin. “The DHS confirmed that the LOA remained in force after the enactment of the National Defense Authorization Act (NDAA) and as a result, PowerTrunk has continued receiving purchase orders from federal agencies and others after the enactment of the NDAA for its full offering of products we are authorized to sell in the U.S.”, added Martin.

“Reviews from the attendees a few weeks after the event have been very positive, which encourages us to organize future editions at our customers’ premises. I want to thank them all, and very especially NJ Transit, for hosting the first Users Group meeting, for making its excellent facilities available, and for its enthusiasm and support”, said Carlos Fernandez, PowerTrunk CSO.

“We are proud of having made such significant progress with TETRA in Canada, the country to adopt the technology for the first time in North America. I’m happy to have met so many of our customers, partners, and consultants at the Users Group and I expect to meet those who couldn’t make it this time in the near future”, declared David Torres, PowerTrunk Senior Vice President Sales.

Every season I clean my room & donate good conditioned clothes to charity. Do you do that as well? #Curious… twitter.com/i/web/status/1…