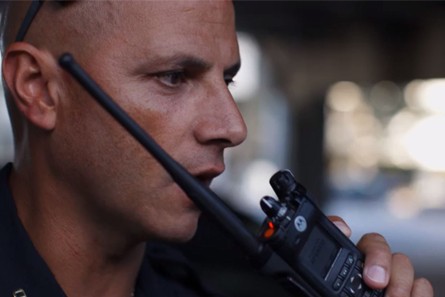 The network is built using Motorola Solutions’ ASTRO 25 technology and is connected to the Iowa Statewide Interoperable Communications System (ISICS) so the county can communicate with all of the agencies that are using the system today. First responders are also using cutting-edge Motorola Solutions APX™ two-way radios that offer clear sound quality and a rugged build for the needs of public safety.

“We’re proud to celebrate the launch of our new radio system for first responders,” said Ron Riley, Chairman, Union County Board of Supervisors. “I want to thank the county’s Board of Supervisors for their foresight in planning for and building the system to help keep our residents safe. You can’t underestimate the ability to communicate clearly and seamlessly during emergencies, when every second counts.”

“Union County is part of a group of more than 35 counties who have joined the ISICS statewide radio network,” said Nicole Sherrill, territory vice president of sales, Central Region, Motorola Solutions. “They are already experiencing enhanced communications across the county. With ISICS, they will also be able to communicate with first responders across the state. This is critical, especially when responding to large scale emergencies – such as ice storms or tornadoes – that can impact citizens across multiple counties.”

This new system was built over the last three years and is now fully operational. A ceremonial “first call” of the radio system was placed by Mark Shepherd, Union County Sheriff, during the Board of Supervisors meeting on Monday, March 1.

Evolve is the latest addition to #MotorolaSolutions communication portfolio. This single device provides flexible a… twitter.com/i/web/status/1…

Evolve is the latest addition to #MotorolaSolutions communication portfolio. This single device provides flexible a… twitter.com/i/web/status/1…

Did you know preparedness grants can be used to help citizens and first responders work together to prepare and pro… twitter.com/i/web/status/1…

You depend on clear and timely communication to keep your teams connected and informed. Our #SafeManufacturing solu… twitter.com/i/web/status/1…

Siloed data can slow you down, leading to missed insights. Centralize your data in a big data platform to enable in… twitter.com/i/web/status/1…

At Motorola Solutions, our people come first and our differences are what make us stronger. We're so proud that our… twitter.com/i/web/status/1…

Is your organization migrating to #cloud apps and infrastructure? Register for our April 21 #cloudsecurity webinar… twitter.com/i/web/status/1…