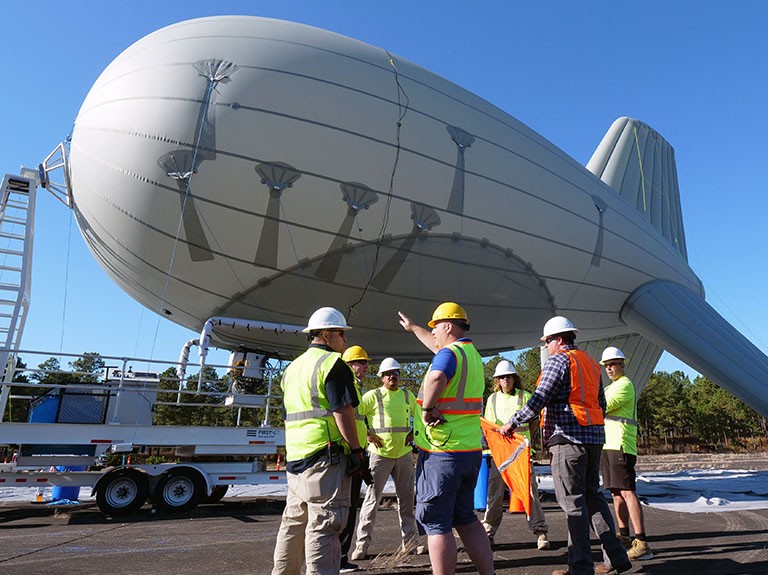 The FirstNet public safety communications platform is growing in a big way. More than 10,000 public safety agencies and organizations across the country have subscribed. And over 1 million FirstNet connections are in service, bringing first responders and those that support them the reliability, capability and accountability they trust to carry out their mission.

“Public safety is called upon to handle emergencies every single day. They have to be ready for the worst with the best tools to help them respond safely, efficiently and effectively,”

“We’re honored to see FirstNet play a supporting role in that response for thousands of agencies across the country.

That includes a giant addition to the FirstNet disaster response arsenal: FirstNet One – an approximately 55-foot aerostat. More commonly known as a blimp, the FirstNet One aerostat is the 76th deployable network asset to join the nationwide FirstNet fleet.

Can fly up to 1,000 feet, potentially providing over 2 times the coverage area as compared to other deployable solutions, like Satellite Cells on Wheels and Flying Cells on Wings™ (COWs).
Fully operational in windspeeds up to 50 mph and capable of withstanding windspeeds up to 70 mph.
Able to stay aloft for about 2 weeks before needing additional helium top-off, giving first responders wide-scale portable connectivity over an extended period of time.
Tethered to a trailer to provide either satellite or wireline backhaul.
Reduces the need for multiple ground-based portable cell sites, freeing those dedicated assets to be used by other agencies nationwide.
The aerostat was recently tested in Tuskegee, Ala. Flight testing established its initial coverage area, airworthiness, payload lift potential, avionics and flight controls, and performance of the power and data transmission lines connecting to the FirstNet network core. Operational methods, procedures and safety standards required to deploy, launch, operate and recover the asset in a public safety incident response scenario were also tested.

“Testing FirstNet One at the historically significant Sharpe Field once again broke new ground for the safety and protection of our country,”

“With the launch of public safety’s aerostat, I look forward to seeing how FirstNet will continue to take the communications capabilities of our Nation’s first responders to the next level.”

Like the other 75 portable assets – including 3 Flying COWs™ – FirstNet One will be available 24/7 at no additional charge to FirstNet subscribers for potential use during major incidents. Disasters where FirstNet One could be deployed include major hurricanes like last year’s Hurricane Michael, where FirstNet assets were deployed for 3+ months in the Florida panhandle while recovery efforts were underway. The FirstNet team at AT&T, led by former first responders, will determine the appropriate asset to send – or resolution – based on the situation.

Another great in the field visiting @CommingsDesmond at the South Elgin @ATT!!! Ozzy did a great a job helping one… twitter.com/i/web/status/1…

Creating Information boards!This July and every single July after it’s all about the First Responders in Norfolk C… twitter.com/i/web/status/1…

SOUND ON: @EdPFirstNet has been busy since being appointed CEO of the #FirstNetAuthority in March. On an ALL NEW ep… twitter.com/i/web/status/1…

RT @NTIAgov: In the last blog of @FirstNetGov’s Roadmap series, we learn how the #FirstNetAuthority is working with #publicsafety to ensure…