PSCR Awards More Than $800K to Tech to Protect Contestants

NIST’s largest open innovation prize competition to date awarded $810,000 to contestants at the Tech to Protect Challenge National Award Event on May 1, 2020. NIST’s Public Safety Communications Research (PSCR) Division, who funded the Challenge as part of its Public Safety Innovation Accelerator Program (PSIAP), distributed the prizes across 25 contestants. By the end of November 2020, PSCR anticipates awarding up to $1.93M in total prizes to contestants for the Tech to Protect Challenge.

The National Award Event recognized contestants’ work in two ways. First, contestants who presented the best application demonstrations received awards ranging from $10,000 to $40,000. Four contestants achieved the highest award amount. Second, 12 contestants who submitted a compelling growth strategy, detailing their next steps to scale up their prototype, were recognized with an additional $30,000 each. They have until November 2020 to progress their products and services for a chance at up to $70,000 each in additional prizes.

Ray Lehr, a Tech to Protect technical lead and veteran firefighter said, "we heard from a group of smart, motivated people from around the country who… are focusing on solving a problem that really needs a solution.”

The problem is that, historically, software developers focus on consumer applications and market segments other than public safety. Such apps may not have the security, functionality, or user experience that first responders require to operate safely and efficiently, and as a result, lack public safety confidence. Tech to Protect was conceptualized to solve that problem. Launched in April 2019, the Tech to Protect Challenge incentivized software developers to collaborate with the public safety community in developing applications customized to the bespoke requirements of first responders.

“Public Safety needs every technology advantage it can gain,” said Lt Charlie Fair, a retired paramedic and one of the Tech to Protect Challenge subject matter experts (SMEs). “I understand how busy first responders are right now but this technology can make their jobs easier and promote life safety. There are teams out there that want to build technology for us, we need to be available for them to help create the technology that we need.”

Lehr expressed a similar sentiment in that the Tech to Protect opportunity demonstrated the need to bring together developers and first responders so that public safety software solutions would be designed with real-life end-user feedback at the forefront. During the Challenge, he witnessed this collaboration in action. “The developers were learning the nuts and bolts of how first responders operate today, and using their modern technology awareness to craft solutions that are smart, affordable, and intuitive - a combination that makes the chance for success much more possible.”
Success, in this case, looks like apps - developed in partnership with Public Safety - making it into the hands of first responders. Often, codeathons aren’t designed for lasting impact.

Bill Schrier, technical Challenge lead and First Responder Network Authority (FirstNet Authority) advisor “I’ve participated in a number of hackathons, and those are “one and done.”  Teams assemble, birth ideas, create some software, demonstrate the software, and often walk away with a prize. But at the end of the weekend, everyone goes back to their “day job.” Rarely does an app or solution get into the hands of first responders.”

Tech to Protect was unique in that it not only sourced ideas and technologies for Public Safety, but it created Challenge components that increase the chances of these solutions being adopted by Public Safety. One significant component was the program’s geographic breadth. A national contest, Tech to Protect engaged every US region through in-person codeathons - pulling in contestants and public safety SMEs from a multitude of jurisdictions and disciplines. That type of collaborative, nationwide “buy in” is essential for making progress in the market. Additionally, contestants got access to technical mentors who helped ensure prototypes became minimum viable products; thanks to Tech to Protect, many of the first-publicly-available versions of these apps are available now.

“It’s been remarkable to watch these solutions grow from concepts to prototypes to consumer-ready products in some cases,” wrote Gary Howarth, a PSCR Prize Manager on the Challenge. “From this program, we have 25 new pieces of technology that are responding to public safety needs by collaborating with first responders.”

PSCR has served as a nexus between public safety and industry since its inception following the attacks on September 1, 2001. One of the ways it delivers on its mission is by running the PSIAP, which incentivizes researchers and teams for partnering with public safety officials and practitioners to solve complex yet pressing public safety communications problems.

“We are a user-driven set of programs. We have to work directly with the first responders because, at the end of the day, they have to have confidence in the systems,” said Dereck Orr, PSCR Division Chief and Tech to Protect Challenge Judge.

To ensure the Tech to Protect software contests were high priority issues to solve in the public safety field, PSCR facilitated a workshop between its researchers, FirstNet Authority advisors, and active duty first responders to determine the contests. Contests covered a range of public safety disciplines and technology areas, including No Need to Repeat: Delivering Mission Critical Communications, Voice Commands to Virtual Assistants Hands-Free, Sensor Integration: Monitoring First Responder Health, and Making the Case: Proactive Image Protection. In all, ten contests were the focus of ten regional codeathons that were hosted in cities across the country during Fall 2019.
The codeathons brought participants and Public Safety together for solution discussion and collaboration. Ultimately, more than 230 contestants and 50 public safety, First Responder Network Authority (FirstNet Authority), and PSCR representatives participated. As a result, 77 new software prototypes were created and assessed by judge panels, which included software experts, public safety leaders, and PSCR researchers. Participants’ submissions were recognized with a cumulative $280,000 in prizes from the regional codeathons.

“Tech to Protect provided a chance for Public Safety to steer the requirements and set the expectations for what apps must include and how they should work,” wrote Craig Connelly, PSCR’s Prize Challenge Manager. “That’s why public safety SMEs were so important to this program. They not only helped us set the focus at the start, they helped us through every step of the Challenge.”

Between November 2019 and January 2020, 62 contestant submissions completed an intensive evaluation process. This process yielded the top 25 contestants; this top group continued in their partnerships with Public Safety for feedback and recommendations in the months leading up to National Award Event on May 1, 2020.

The virtual National Award Event allowed each of the top 25 teams to make their case to a judge’s panel and more than 230 attendees via 12-minute product demonstration presentations.

“I became more enthusiastic with each one,” said Schrier. “These teams are committed to making the best possible products. Their motivation was clearly far beyond the prize money or the chance to create a startup company. They are truly passionate about providing help to our nation’s first responders who are on the front lines now more than ever.”

The passion paid off – literally. Each of these top contestants left the National Award Event with a prize based on designations of good ($10,000), very good ($15,000), excellent ($20,000), and superior ($40,000). Contestant solutions were recognized for the quality and functionality of their software application, ability to design features specifically for Public Safety’s use, and potential for positive impact in the public safety sector. 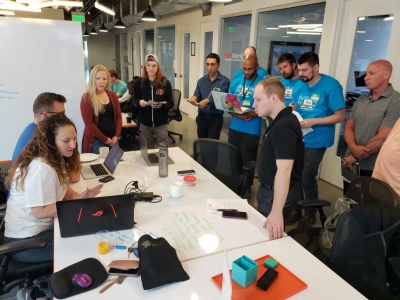 Twelve submissions received an additional prize of $30,000 each as part of the Seed & Progress Round evaluation, which recognized business acumen, scalability, and growth strategy. This award is divided in two parts – the $30,000 seed award, presented on May 1, and a progress award of up to $70,000 each in November 2020. The latter prize will be awarded based on the progress each of the contestants make on their growth strategy in the six months between milestones.
“Each of the 12 finalists who received $30,000 to continue improvement of their products have a detailed plan to add partners, capabilities, and improved functions to their solutions” Schrier remarked. A former police officer and Chief Information Officer for the City of Seattle, Schrier was particularly impressed by one team that incorporated voice commands from an “assistant” to access law-enforcement databases - even testing it while one team member was on patrol. Another noteworthy team created a patient tagging system to include voice input, “which is now so important because medics can’t use a gloved hand to type on a smartphone or tablet.”
The large investment is a testament to PSCR’s commitment to ensuring all its funded innovations move forward into the best possible environment for commercialization. While PSCR typically conducts R&D on the 5-10-year timeline, Tech to Protect was uniquely focused on fueling an innovation pipeline in the near term. (Listen to a podcast with PSCR’s Ellen Ryan to learn more about the pipeline.)

“I have no doubt some of the solutions developed by Tech to Protect will find a home in the FirstNet App Catalog and more importantly, become the "go to" app that first responders rely on to perform their critical tasks,” said Ray Lehr. The retired firefighter was particularly interested in solving the Triage issues at a mass casualty event. He exclaimed, “I honestly believe a couple [of solutions] have the potential to become a product the EMS agencies around the country will be excited to use.”

With the help of Tech to Protect, others feel assured that positive changes will find their way to emergency responders.

“I’m confident solutions from this Challenge are going to progress to the market and benefit Public Safety in the months and years to come,” remarked Mark Golaszewski of FirstNet Authority, who was the third Tech to Protect Challenge Judge at the National Award Event.

FirstNet Authority and its partner FirstNet Built by AT&T encouraged contestants to join the FirstNet Developer Program and begin the process for getting listed in the FirstNet App Catalog.

As with the consumer market, Public Safety’s reliance on technology only continues to increase. While the need for software innovation for first responders is palpable, “they have to have it proven to them – and it has to be reliable,” says FirstNet by AT&T’s Stephen Devine. That’s why it’s monumentally important to bring Public Safety in at the start and check in with them regularly. Tech to Protect is proof that the future of public safety communications R&D depends on all parties having a seat at the table.

“In my 40 years of working in public safety, I've seen very little research focused on the specific needs of first responders,” recollects Ray Lehr. “Today, with the FirstNet network and the cost of laptops, tablets, and smart phones within the range of most agencies, we can take advantage of this alignment of technology, need, and desire to help to really have a positive impact on public safety.”

As for Lt. Fair, he’d like to emphasize the criticality of first responders staying abreast of programs such as Tech to Protect. He says first responders should take a look at the solutions and “find one that may work for you – take a deeper dive and see how it could improve your organization.”
“Tech to Protect will be known as the place for tomorrow’s first responder technologies,” Devine concludes. “The future is out there and it’s coming faster than we think.”