ASTRID Police Inspectors Participate in the Development of TETRAsim 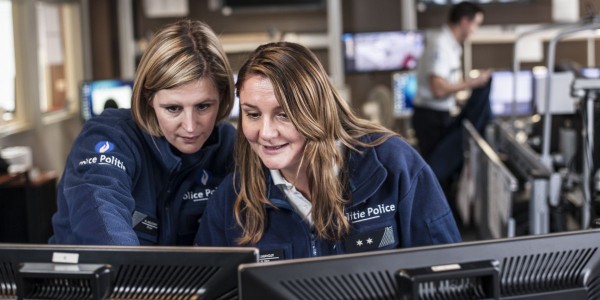 Mélanie Malcourant and Katleen Claerhout, Inspectors of the South Police Zone (Anderlecht / Sint-Gillis / Vorst) in Belgium, talk about their participation in the development of TETRAsim TETRA simulator, that is used by end users of the ASTRID (Belgium Public Safety Network Operator) network.

What exactly does your position entail?

Mélanie: 'It is fairly varied. We work as OPO, operational programmer. That means that we enter data in the ASTRID database.

We also try to facilitate the work of colleagues as much as possible. For example, we request floor plans from as many schools as possible in the zone, which we enter into the systems and which can be very useful in the event of an incident. We make the documentation available to the personnel in our police zone.

Another example: we are actively looking for contacts at pharmacies, among others. If there has been a burglary, we can warn them. That way, the patrols do not have to be present for hours and they can quickly free themselves for other tasks. "

You have also participated in the development of TETRAsim.

Katleen: 'As the only representatives of the local police. In practice we have worked out a number of scenarios for our own Motorola radios. Others have written the scenarios for the Sepura and Airbus radios. All functions of the radios are covered: from the on/off button and the pin code to changing the call group, the functions of the various keys, and so on.

The reason for the development of TETRAsim is the attacks of 22 March 2016. Our leadership then became aware that too many people are still using their radio in the wrong way, which has consequences for the availability of the network."

Katleen: 'Voice communication is often still used, while you can also use shortcut keys to send a short data message. If you send a message that you are on site instead of calling the dispatching, it will burden the masts a lot less. Good use of radios can make all the difference in crisis situations. "

Mélanie: 'You notice that many new colleagues do not know certain finer points and functions. The police schools are not to blame for that: there are just too few hours available to learn how to use the radio. That is why TETRAsim is very welcome. From now on, every police force or service must strongly encourage an annual TETRAsim refresher course for its own employees. Why are the shooting exercises mandatory and the radio training not? We say it often, and it is true: for your safety, a radio is just as important as your service weapon! "

Katleen: 'It has just been installed here. I have to say: everyone is very enthusiastic. The system is very user-friendly and robust. We also followed training at ASTRID for this. That way we can assist our colleagues with advice and action!"

You have also become friends on the job.

Katleen: 'We knew each other well, but it is only in our current job that we got to know each other better. It clicks, which is always included when you form a team. Our daughters were born two weeks apart. So we see each other regularly, within and outside office hours. "