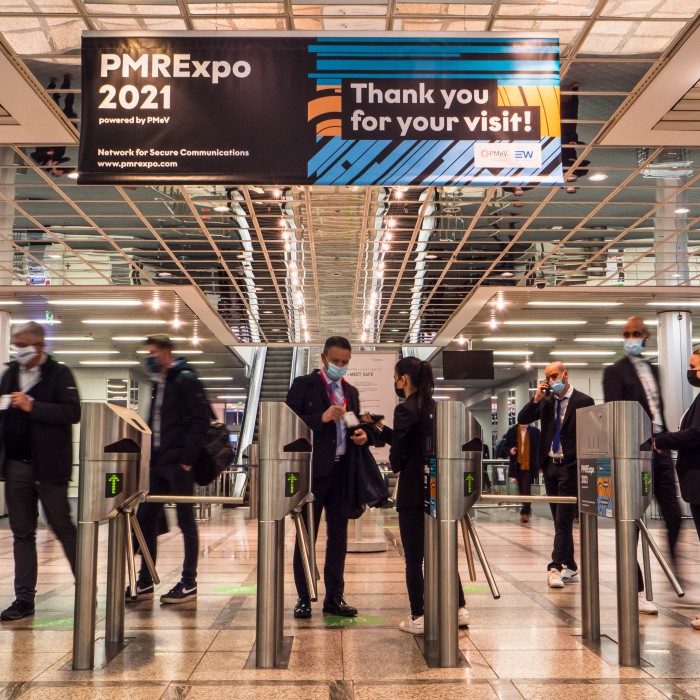 Thanks to an extensive hygiene protection concept, the 3,500 visitors were guaranteed a safe participation.

After PMRExpo 2020 could only take place digitally due to corona, 140 national and international exhibitors presented again their products, services and innovations to interested trade visitors in person.

"In these challenging times, we have all become very aware of how important personal exchange is," explained Bernhard Klinger in his position as Chairman of the Board, Federal Association of Professional Mobile Radio (PMeV), the conceptual sponsor of PMRExpo.

Thanks to an extensive hygiene protection concept, the 3,500 visitors were guaranteed a safe participation. In addition to the 10,000 sqm exhibition area, PMRExpo 2021 included a comprehensive congress program as well as specialist forums as hybrid variants. The focus through the presentations was 5G and broadband technologies, including their applications.

A look at the exhibitors' products and services showed that, in addition to the proven and well known, many innovations were also on display. The exhibitors praised the opportunity to talk to their customers face-to-face again, as well as the large number and high quality of personal exchanges.

"We met many existing customers and had many important discussions. Of course, you notice that the hall aisles are a bit emptier than usual. Still, it was good to be here and it is good to have trade shows again. It was also worthwhile for us to be here," explained Hanno Heeskens, Managing Director of cubos Internet GmbH from Aachen.

In its 21st year, PMRExpo once again provided the ideal setting for identifying new trends, getting to know current innovations and making high-quality contacts.

After many months of virtual meetings and video conferences, PMRExpo once again offered a variety of opportunities for face-to-face exchange of opinions and information. For example, companies presented their products and services daily with talks in the Speakers' Corner directly in the exhibition hall. The Professionals Forum offered the audience the chance to find out about the possibilities of securing, recruiting and training skilled workers with the help of the PMeV network.

"PMRExpo will document the significance and importance of professional mobile communications," B. Klinger at the opening. In his estimation, the pandemic has advanced digitalization. He concluded by calling on the community to learn lessons from the summer's flood disaster regarding communications technology.

North Rhine-Westphalia's Minister of the Interior Herbert Reul, who was a patron via video transmission, commented on this topic. He said that PMRExpo is a driver of innovation and that his state wants to drive digitalization forward. As an example, he mentioned the expert forum on the development of structures for "networking information to present the state of the country" (VIDaL). H. Reul praised the recently launched official emergency call app "nora" of the federal states. With the app, citizens can quickly and easily reach the police, fire department and ambulance service in an emergency - which is especially valuable for people with speech disabilities.

Referring to the heavy flood disaster, the speaker explained, "We've seen here how essential communication is between emergency services." He advocated upgrading the digital radio for public authorities and organizations with security tasks (BOS) - above all, he said, it should be designed for broadband applications for data transmission.

Andreas Gegenfurtner, President of the Federal Agency for Public Safety Digital Radio (BDBOS), gave an update on digital radio for the "blue-light organizations" at the start of the second day of the trade fair. Under the heading "Between crises and the communication of the future," he addressed the challenges in BOS digital radio.

The focus of the 21 presentations over the three days of the congress was on the potential of the 5G mobile communications standard and its future-oriented applications, broadband technologies and campus networks.

"In the long term, 5G will replace all other wireless networks!" explained Prof. Dr.-Ing. Ralf Tönjes from the University of Applied Sciences Osnabrück.

As examples, he and other speakers on the following days named as potential areas of application for 5G and campus networks: Machine communication as an application for the Internet of Things - for example, the connection of smart meters - logistics applications and autonomous driving.

The Federal Ministry for Economic Affairs and Climate Action forecasts 5,000 to 10,000 campus networks by 2025. Bernhard Klinger of Hytera Mobilfunk concluded his presentation with the appeal: "Start now! Begin small and develop continuously!"

5G on the Radar at Comms Connect in March

Informa Takes Away Doubt About IWCE 2022

Multitone to Demonstrate Ekotek and i-Message at Critical Communications World