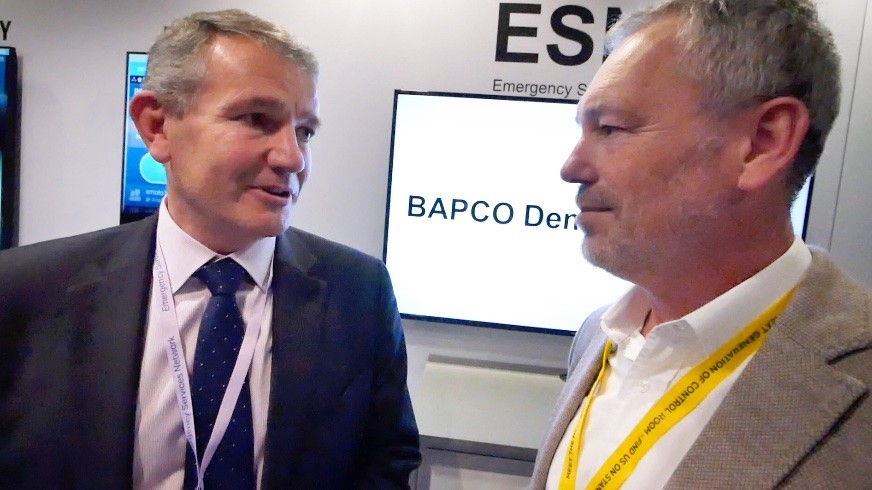 ESN (Emergency Services Network) together with the Home Office, Samsung, EE and Motorola Solutions showed a real live demo at the annual BAPCO exhibition that was held this week at the Ricoh Arena in Coventry, UK.

It was worth while waiting on the first live demo of the ESN network, the public safety network in the UK that will replace the Airwave TETRA communications network. During the one hour session that was held during the annual BAPCO event in Coventry, UK this week, ESN showed a live demonstration of the ESN PTT service over the EE network.

At BAPCO, ESN organized several live demo sessions to inform end users and stake holders of the ESMCP project. During the second day at BAPCOO, one of the last demo sessions was held in order to inform a broader audience that excited of press, government representatives, association executives and critical communication experts from the UK and other parts of the world

It was clearly visible that when a call on the ESN network is made, the ESN name (and not EE) appears at the top of the PTT device in order to give the end user the confidence that they are connected to the right network, that includes security, priority as well as pre-emtion services. The latter could not be demonstrated during the demo session however during an earlier test that was made at a large scale event in London (Notting Hill carnival), all seemed to work fine.

During the demo, it was possible to toggle between the talk groups and when making a call, we experienced that the call setup time was fast, although the <300ms as used in TETRA communications could not be reached.

Although the solution is currently not 3GPP compliant, Steve Whatson (ESMCP's deputy director - pictured) stated that part of the Home Office’s contract with Motorola Solutions includes a roadmap to ETSI's Mission Critical LTE standards that are developed within the 3GPP.

Samsung
Samsung supported the demonstration wit a Samsung Galaxy rugged S7 device, loaded with Android 7 software. A device that specially has been designed for use on the ESN network. The new device was also showcased at the both of Samsung. It has an IP68 rating, MIL-STD-810G compliance and a large battery of 4,500 mA, that will enable the end user to use the device during one shift when using intensively bluetooth and accessories.

At first sight, the device looks very slim and is similar to any other smartphone device. There is a PTT button on the side and an emergency button at the top. A large antenna at the top, as used with regular PTT devices is missing as the antenna is integrated in the housing of the device.

Most likely not all first responders will queuing to use this device in the future, however those who would like to operate the device without gloves wil mostly benefit from the subscriber with this new PTT form factor.

During the demonstration, all apps were successfully demonstrated.

The Future
For the near future, ESN will organize more live demonstrations in a "road show format". This is expected to be in a similar setup as organized during BAPCO 2018.

It now seems that for many end-users, this demonstration provided more trust in the further development of the ESN network. Although there are many hurdles to come, it now seems that the future of critical communications for public safety officers in the UK has taken the next step.

An interview with Steve Whatson - ESMCP's deputy director - will be posted shortly in this YouTube channel.

Emerging ‘Backroom Bearers’ for Mission-Critical SCADA Apps not yet Proven

The UK-based Internet Watch Foundation (IWF) has announced that it will be sharing its ‘PhotoDNA’ of child sexual a… twitter.com/i/web/status/1…

We are proud to announce @Hytera_UK as a Gold Sponsor of #BAPCO2020! Find out more about their innovative professio… twitter.com/i/web/status/1…

Drop by @PulsiamEN at #BAPCO2020 to discover how their fully integrated software and mobile application suite can s… twitter.com/i/web/status/1…

It's not too late to exhibit at #BAPCO2020! BAPCO is the only event of its kind, providing a platform to promote yo… twitter.com/i/web/status/1…

Say hello to our Silver Sponsor @audaxsolutions at #BAPCO2020 to learn how their Body Worn Video solutions could op… twitter.com/i/web/status/1…