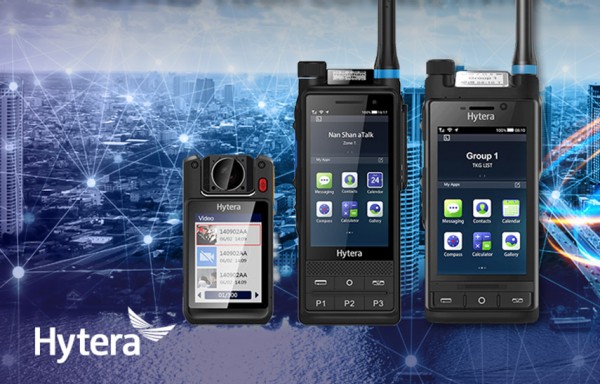 Narrowband radio systems are essential for critical voice applications – including group calls and emergency calls. LTE systems use broadband to provide fast LTE data services and they form the basis for improving the efficiency of all manner of mobile data applications, such as security services. Combining these systems to create a complete hybrid PMR/LTE system marries the strengths of both technologies for maximum convergence.

Hytera's convergent PMR/LTE solution comprises a fully convergent infrastructure consisting of the proven ACCESSNET-T IP TETRA radio system, full PMR functionality and Hytera's new "private LTE network". Furthermore, with its very own PMR- and LTE-capable handheld radios, Hytera is creating revolutionary and complete convergence – even on the user's side – for a homogeneous working and communication environment.

Maximum convergence: The ACCESSNET-T IP radio system from Hytera is a digital TETRA mobile radio system that's highly scalable. Together with Hytera's new private LTE solution, ACCESSNET-T constitutes a powerful and convergent communication platform. Its infrastructure uses Hytera's indoor and outdoor variants of TETRA/LTE base stations, including the Hytera iBS. The iBS is a fully integrated and efficient base station that's equipped for operating LTE and TETRA. The base stations used ensure optimal radio coverage and consequently maximum availability thanks to the convergence of PMR and LTE. The network management system provided for the TETRA/LTE solution identifies and administrates all the PMR and LTE subscribers fully independently and according to demand in the network. This enables users to communicate within the PMR/LTE system using the terminals (PMR and LTE) assigned to each subscriber – intelligently and without having to worry about the radio coverage.

Despite the use of differing radio technologies and radios, Hytera offers operators, network administrators and users a fully homogeneous communication platform with Hytera's own PMR/LTE radio system. This unites various standards and communication levels, which is a real boon in terms of homogeneity, performance and quality of service.

One of the biggest advantages of Hytera's TETRA radio systems is that they can be equipped with exactly the radio coverage and capacity that users need. Expanding systems in order to respond to new requirements is often a key issue in the radio industry. Using Hytera's convergent LTE network to expand existing PMR systems is cost-effective and limitless, allowing optimal adaptation and use of the existing TETRA or PMR infrastructure as well as the existing radios.

Users can employ either classic TETRA radios or Hytera's PTC680 and PTC760 multi-mode advanced radios (LTE and TETRA) and also Hytera's Bodycam family for the convergent solution. As the first devices of their kind, they offer a truly convergent platform in that they autonomously combine mission-critical narrowband communication with LTE broadband data transmission. This means that in Hytera's own TETRA/LTE system, users benefit from the best of both worlds:

Whether you need machine-to-machine data exchange (M2M) or the Internet of Things (IoT), video streaming from your site of operation or even the ability to query databases - premium functionality and flexible communication are what you receive.

New ETSI Group to Focus on Efficient Use of Capacity, Security & Lower Latency for Live Media

ATBB Increases its Presence in the Blue Light Market